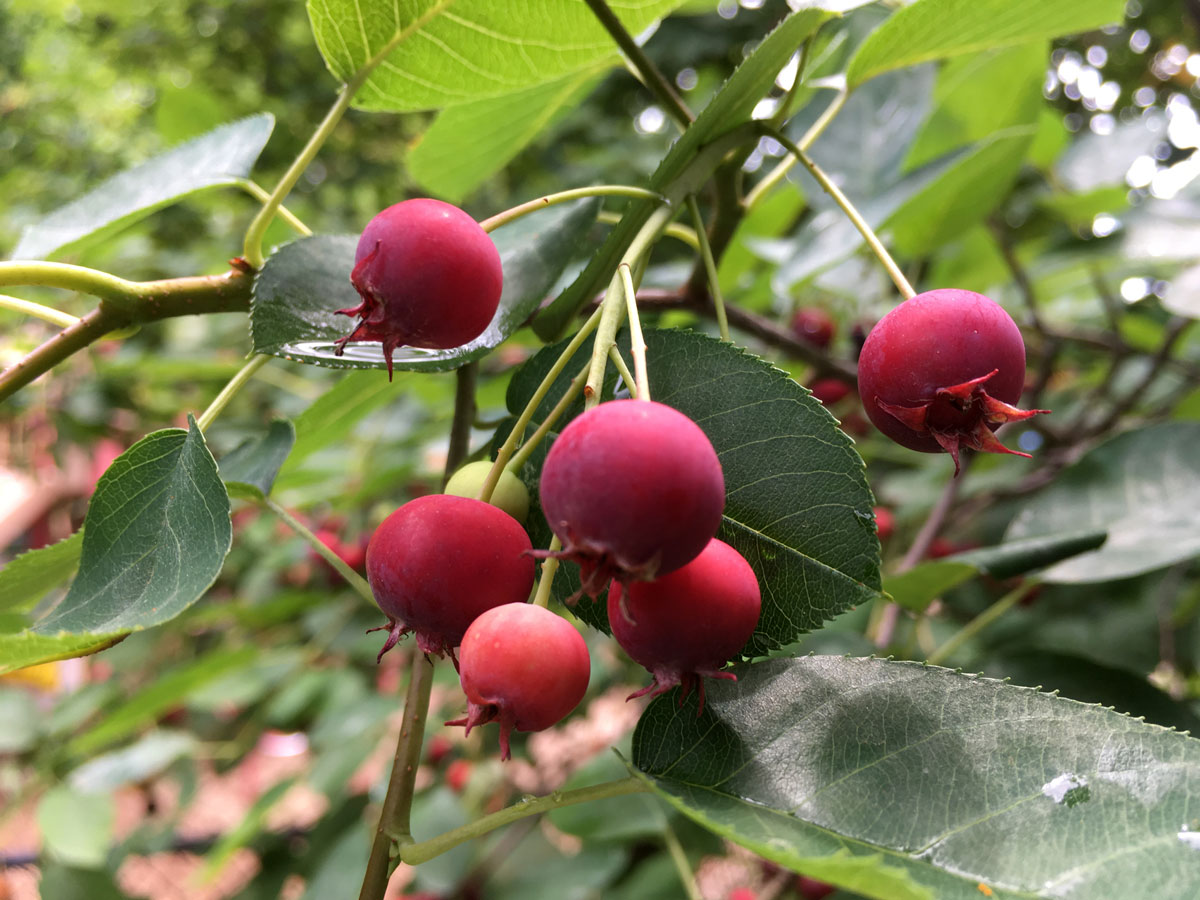 Oh Juneberries, how do I describe you? The complexity of a mixed berry dessert all in one round little ruby package. You are like a blueberry and cherry tart, with shaved almonds on top. Not overly sweet. But packed with an incredible amount of antioxidants. More than 3x the typical blueberry. You won’t be found at the local supermarket, but may be frequently found growing in many parts of the Northern US or Canada. Freely picked by those in the know.

We discovered these delightful berries growing along a local path last year. As soon as we learned about them, we started seeing them everywhere! At the local parks, by the pond, along the running paths. We were greatly anticipating their appearance this year, and have been happily indulging as of late.

How do you recognize a Juneberry?

Juneberries grow on a shrub, and the different varieties can range from 1.5 – 40 feet tall. The leaves are an oval/oblong shape, and alternate from side to side along the stem. The berries themselves have a frilly crown on the bottom, similar to a blueberry. As I understand it, this is the critical characteristic to recognizing a red berry in North America that is edible, according to Steve Brill. You should be pretty safe eating a red berry with a frilly crown opposite the stem, but always check a couple other sources just to be sure!

Juneberries are native to the U.S. and Canada. They were well-known by the Native Americans and used in pemmican. (The Native American’s Cliff Bar, if you will.) They are a part of the rose family and related to apples (which are surprisingly not native to the Americas, for the most part.) In fact, the fruit itself is technically a pome, and not a berry, but who’s to tell their taste buds they lie?

Juneberries are becoming a popular ornamental tree. I just learned from our local tree warden that Juneberry is one of the 10 trees they have selected to plant along city streets in our town. This being one of the smaller tree varieties they will more likely choose this variety when planting beneath a power line.

Where we are right now (near Boston), they are in their peak near the end of June and may still be on the trees in early July, although at some point the birds will completely clean off the tree.

A Berry by Many Other Names

We call them juneberries, as it rolls off the tongue the easiest (by design, as this name is a result of recent market research.) It’s useful to remember when they are ripe, although we find we have to wait til nearly the end of June to pick them. However, there are a plethora of other names with richer histories, mostly based on local Spring phenomenon.  One common moniker is serviceberries. Legend states that in Appalachia this was the only tree blossoming when the ground thawed enough to bury the dead from the previous winter… and presumably there would be a flurry of funeral services? Another regional name is Shadbush, because it would be blossoming when the “shad” fish were running in New England streams. In Canada they are known as saskatoon berries, which is what the indigenous people called them, and the largest city in Saskatchewan was named after them.

The trees start out with pretty white flowers in the spring, which give way to green berries. These berries then turn red, and we find ourselves starting to eat them even though they haven’t reached their full potential yet. Then they turn a dark purple, and this is when they make your heart sing. You will wonder why you even bothered with the effort of plucking those red berries. You can put your hand up into the tree and a whole clump will eagerly fall into your hand. Their flavor is much fuller, covering all the taste buds from left to right.

We usually end up just eating them all as is, but when we have some leftovers we like to throw them into our favorite muffin recipe. I have also read they freeze and dry well.

I love taking the boys to the park, and filling a container while they play on the playground… or while they climb the tree and pick with me. It always amuses me how I get some strange looks, some friendly inquiries, and then always when we leave I look back and see multiple people under the tree, curiously picking and trying this new berry. The knowledge that has been passed onto me I pass unto others. And now I share with you!

Have you discovered Juneberries yet? What do you call them? Do you love them as much as I do???