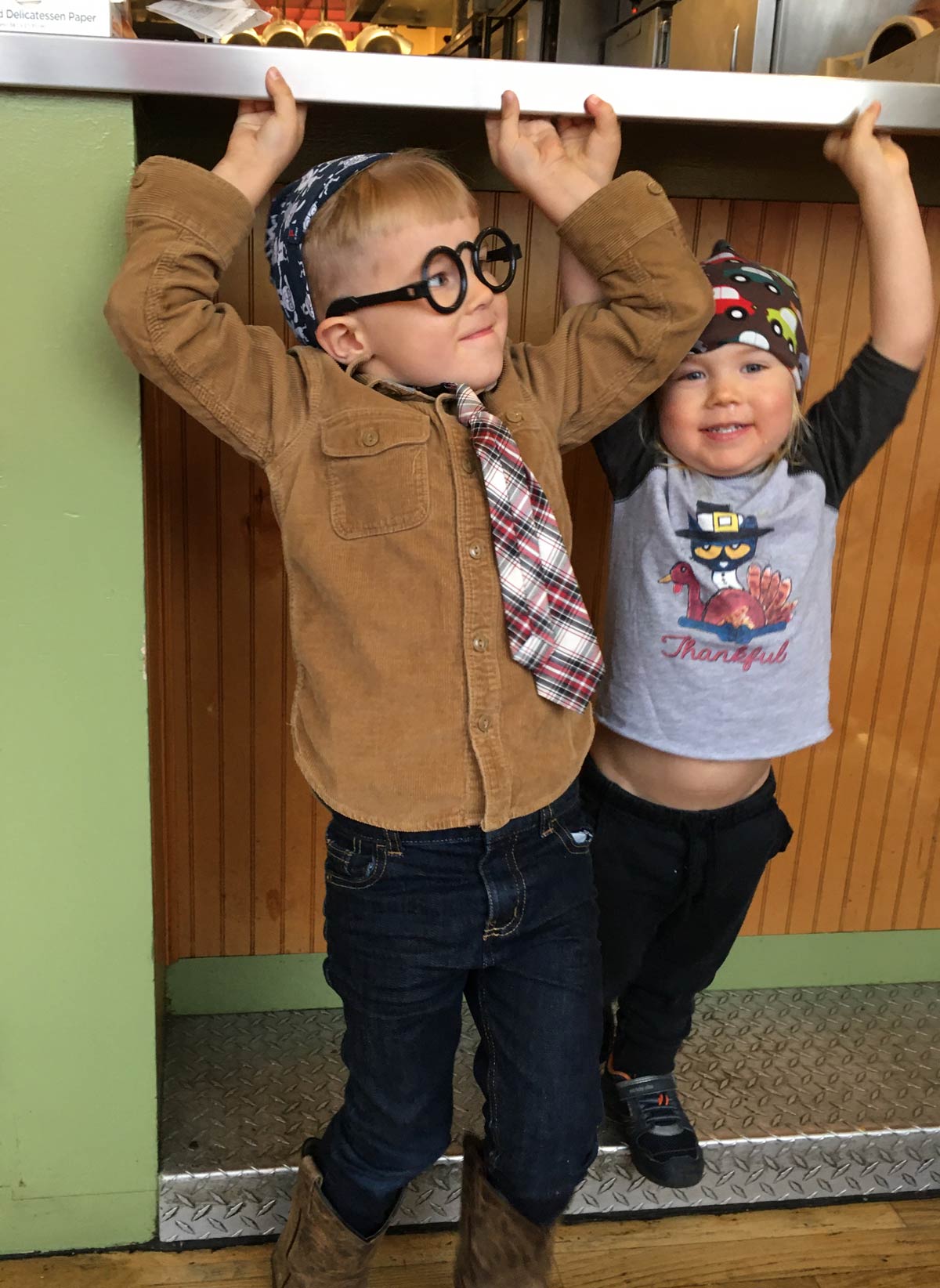 I have just been enjoying life with my two little guys so much lately, I thought I should document it. (If only to remind myself later what a delight this life can be!) Here’s one random week. Nothing momentous. No holiday. No vacation. Just a typical week in the late fall. Soon enough after Halloween for young minds to sustain a lingering interest in costumery…

The Week of the Tie

Mr. P. snagged a tie at the church clothing swap on Sunday. A classic plaid tie. Mom didn’t see how this formal piece was going to fit into his current wardrobe, but she sure is glad she put aside her controlling instincts and let him take it home. Mr. P. had a vision. Unconstrained by fashion expectations, his unexpected pairings have brought surprise and delight to many during the course of the week. The tie has proved its worth. (The glasses were from that brief moment when he wanted to be Waldo for Halloween.)

A good reminder to allow space for littles to carry out their own creative visions.

A day with no plans became a lovely morning of building empathy and “spreading smiles” thanks to a quick scan of my latest source of activity inspiration. We already had a couple dozen acorns we had collected (and mom was more than happy to get out of the house.) The activity was to simply cover them with happy faces and distribute them around the neighborhood where someone might encounter a surprisingly cheerful acorn. The best part was the conversations. We enjoyed imagining what people might think when they found them. (“People are going to think the mailman is bringing acorns now instead of mail!”)

Banned from the House

Heading home from playgroup, we found out dad was on a Very Important Call at home, so we delayed our disruption by stopping at the local bbq joint for lunch. Nobody complained. Not even the workers. I’m not sure if they were more entertained by, or entertaining to the kids. Either way, everyone thoroughly enjoyed ourselves. And yes, this delightful Pete the Cat Thanksgiving shirt on Dubs was another clothing swap gem.

This pulpit-proportioned box arrived in the mail, naturally prompting many sessions of church-playing for the boys. (Good thing there was a formal tie on hand!) What sort of messages did I hear proclaimed from this pulpit? The most memorable quip that I caught from Pastor P. was, “Everybody who is NOT a pastor MUST sing in the CHOIR!”

There’s no need for bystanders in life!

Dubs has no hesitation jumping into creative activities. After a gallery tour focused on “color theory,” he didn’t need any teacher instruction before diving into color experimentation. Faced with an interactive poetry wall, he suffered not an ounce of writers block. I couldn’t exactly decipher his creative genius, but I know he’s on the right track. Removing inhibition is the critical first step in all creative processes. Meanwhile, Mr. P.’s creative output was this wire “Grampert,” which is “like a moose, but lives in tornadoes.” We’ll be on the lookout back in MN…

Steps and more steps, everywhere we go. This could be a bother, but my boys love the opportunity to practice their counting and estimating skills. Mr. P. counted 51 steps on this staircase, which he was surprised to find out had more steps than the grand staircase we had counted by the BBQ joint. As always, Dubs is mimicking and learning from his brother, “one, two, fee, feerteen, nineteen, twenty-one, twenty-fee…”

Mr. P. has recently developed an affinity for “worker clothes.” After devotedly watching the curb across the street get removed, a fire hydrant replaced, and the replacement of the curb, he and Dubs were rewarded with an opportunity to get up into the digger! What a treat for Mr. P! He was disappointed afterward that the worker didn’t treat him more like a peer. “I don’t think the worker noticed my worker boots,” he told me with a sigh, “because then he would have known he didn’t have to lift me down off the digger.”

When mom gets the night off to go to choir practice, dad gets his turn of fun with the boys… His teaching point for the night is that when we see something we want in the Amazon catalog we don’t have to buy it, we can make it. Of course the boys were utterly delighted with the results. They wore their costumes out to the museum the next day, providing some living, walking art for the amusement of others. (Btw, Chihuly artwork makes for an amazing backdrop for a superhero!)

Trailing behind Mr. P on a short bike ride, I get a big smile from every passerby. One woman stops to exclaim “Well, isn’t it nice to see a young man riding a bike with a tie.” Yep, he’s with me… and what a delightful journey this has been so far. I just love doing life beside my two boys!

Love the ones you’re with!

Any other stay-at-home parents out there that love their job? I’m not good at keeping the blog up-to-date on our day-to-day life, but try instead to capture these mom-life anecdotes on my Instagram account.

Bleeding in Pregnancy — A Story of Uncertainty