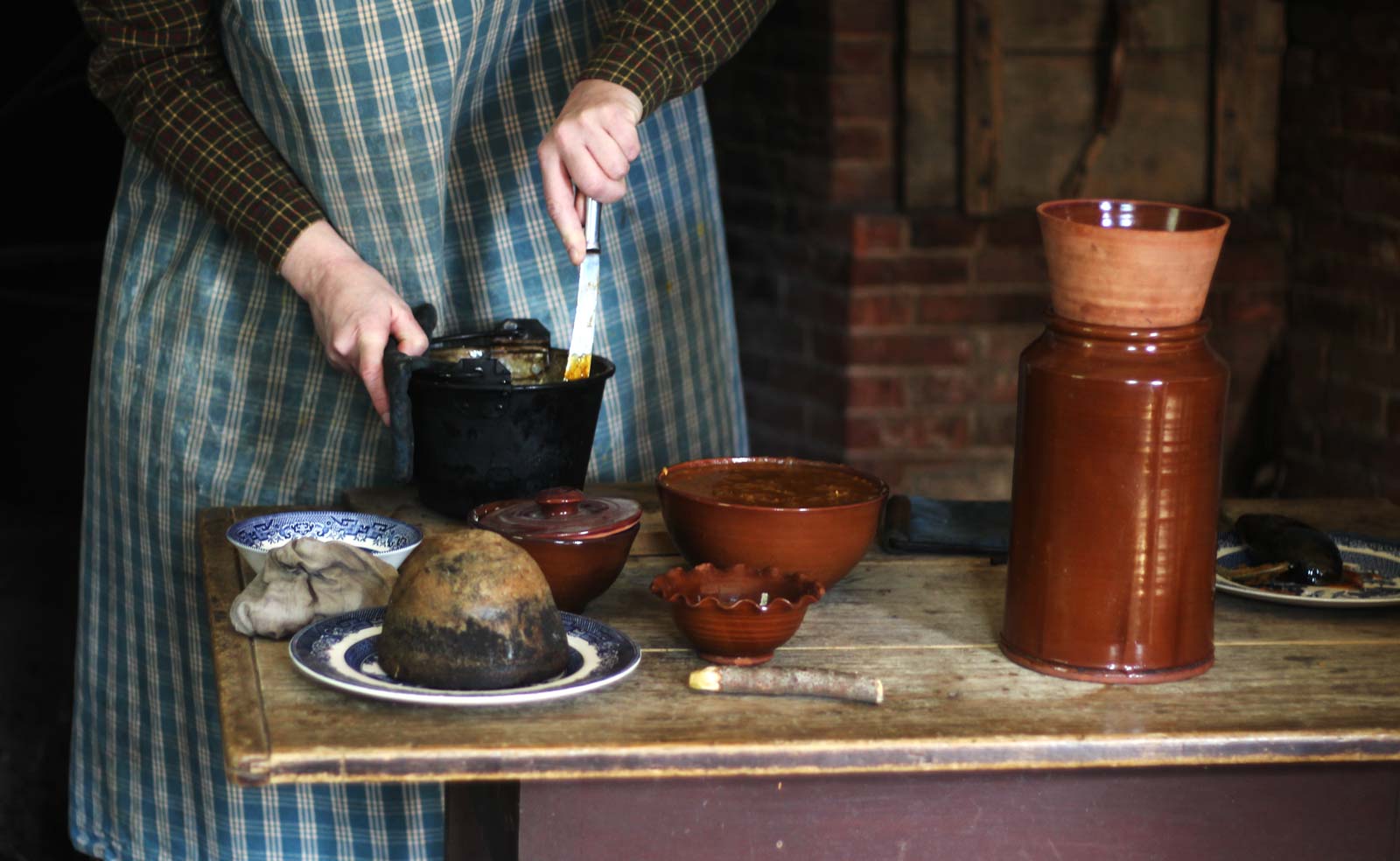 Nothing like a glimpse into history to inspire and romanticize my little backyard maple syrup tapping project. I always love a trip to Old Sturbridge Village, where they keep early American traditions alive. It was especially fun to visit during Maple Days to see how New Englanders did maple sugaring in the early 1800’s. The workers are just so knowledgeable, I always walk away with some fascinating insight on our cultural heritage and traditions. This trip was no disappointment, as I not only learned how they did maple sugaring, but the surprising reason why many colonists practiced the tradition (hint: it was more political than economical!)

Where did the maple sugaring tradition come From?

It amazes me how someone figured out if you collect enough sap from a certain type of tree, evaporate about 98% of it, bring it to a certain temperature where it acts a particular way in the snow, stir it just enough but not too much, let it harden, and then drain out any remaining liquid, you will have an incredibly delicious substance to sweeten food. I mean, this was not someone just minding their own business under a tree until an apple fell on their head!

Interestingly, the maple sugaring tradition is one of only a few agricultural practices not brought to America by the European settlers. (In fact, maple syrup is STILL not very common in most of Europe!) Native Americans taught early settlers how to tap into this beautiful gift from nature. History holds a number of legends about how Native Americans made the discovery, including a tomahawk left in a tree overnight, a wife inadvertently boiling venison in a bucket that had collected sap water, and close observations of the squirrel, but nobody knows for sure how it came about.

Why was it called maple sugaring?

The vast majority of maple syrup was not consumed as maple syrup when Americans began tapping maple trees. Maple syrup was just one step in the process of turning maple sap into maple sugar. Maple syrup was not so useful in the 1800’s, since it would freeze in the winter and go bad in the warm summer. Maple sugar, however, would store well for at least a year. It was also a more versatile sweetener since it had less of a maple flavor. Women drained as much of the dark brown liquid (molasses) out as they could so it would resemble the white sugar in the stores.

How economical was maple sugaring?

Since women were trying to mimic the white sugar in the stores, you would assume they must be saving money to make the effort worthwhile. This was not true for many New Englanders, who could buy white sugar relatively cheaply in the stores. Maple sugaring was an expensive, unprofitable undertaking. It seems the resource intensity of boiling sap to syrup is a practical challenge that transcends time. It takes 40 gallons of sap to make 1 gallon of syrup. Even today, energy costs are the largest driver of the high costs of pure maple syrup.

Demand for wood was high, and the more populated areas of southern New England were deforested in the early 1800’s. To feed a hot fire for 3 days in order to make just a couple pounds of sugar was a money-losing proposition. So why did so many families make their own maple sugar?

For many, it was a form of political protest against slavery. White sugar was made with slave labor in the South and in the West Indies. Boycotting this product was one way women (who didn’t have the right to vote yet) could wield some influence. Women’s anti-slavery societies held “Ladies Anti-Slavery Fairs” featuring baked goods made with free labor sugar. Women would proudly serve their neighbors teacakes and pumpkin pies made with maple sugar and encourage them to take up the practice of maple sugaring as well. Of course there were areas (like up in Vermont) where there was still an abundance of trees and maple sugaring was more practical, but for many it was a moral cause.

Early maple sugaring was much more involved than the process we follow today! Not only did they carry the process beyond maple syrup, they started the process earlier by making their own equipment to tap the trees. The first step was to carve maple spiles out of a soft wood like sumac. Spiles were hollow pieces that channeled the sap out of the tree into a collection container. (See these instructions for making your own spiles. I think we’ll try this when the kids get a little older!)

The colonists used a hand-cranked augur to put a hole in the tree, and then inserted the spile as you see below.

You can see the maple syrup spiles in action here. They weren’t the only handcarved piece of equipment! Logs were hollowed out to be used as collection containers. With these open-top hand-hewn logs, filtering the debris was an important step!

The sap was collected and carried in buckets to these cast iron kettles. They would lay a cloth across the top to filter debris out of the sap as they poured it in, and tend the fire as the sap would boil down. This larger kettle would take about 6-8 hours to boil down.

Finishing syrup off is a tricky business even with today’s precision thermometers and hydrometers. It was an even trickier business in the 1800’s. Not only did they lack precision technology, these massive cast iron kettles retained so much heat, the syrup maker had to predict when it was going to turn into syrup and remove the kettle from the heat ahead of time. If they waited until it turned into syrup to remove the heat, the syrup would scorch from the retained heat in the kettle.

Once the sap became syrup, it was brought inside for processing into maple sugar. It was now heated under slightly more controlled conditions to an even higher temperature to crystallize the sugars in the syrup. “I watch for little bubbles and then test it in the snow to see if it keeps the form of a ball,” I was told. (This is hardball stage in candy-making, about 50 degrees above boiling.) Once it reached this point, it was taken off the heat and then gently stirred for about 5-10 minutes to refine the crystals.

Once the maple sugar crystalized, the women would pack it in glazed clay molds like you see here. They would let the mold sit up to a couple days to harden, and then pull the plug out of the bottom to let the liquid drain out.

The longer they let it drain, the whiter the sugar would get. This drained liquid was molasses and would find a good use in baking. The resulting sugar mounds were similar to brown sugar of today and would last for at least a year. Ironically, today’s brown sugar is made from completely processed white sugar with molasses added back in.

If you get the chance, you should try maple sugar! I just love the maple flavor, and it adds a nice touch to baked goods. It is hard to come by and rather expensive though. Surprisingly, it’s much cheaper to buy maple syrup and make it yourself. You can have it easier than the colonial women by using your KitchenAid mixer, as described here. If you’re really feeling ambitious, you should carry on this truly American tradition and tap your own tree. You only need one tree, and it’s easier than you would think! You can find simple instructions here.

Have you tried making and/or tasting maple sugar? What did you think? What do you like to use it in? Let us know in the comments below!

The Serendipitous First Year “No Till” Garden

Finding the Best Heirloom Apples for the Small Home Orchard